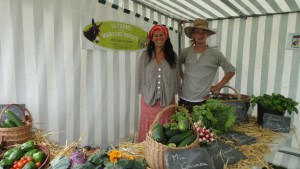 Edouard and Linda founded the Ferme de la Mare des Rufaux in France in 2012. They grow organically 180 varieties of fruits, vegetables and aromatics in a 2.5 ha land in Haute Normandy near the city of Rouen.

They do not use any non-renewable input and produce various nettle or other plants manures to fertilize and protect their cultures. They grow their production on mounds of soil and practice agroforestry; this allows them to have really low irrigation needs.

Linda and Edouard were ment to build a farm together. Let’s go back on how they end up being new peasants. 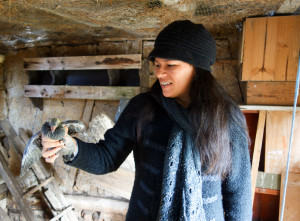 Linda, grew up near Paris (France), after having completed a master in real-estate she started her professional life as usually do many young graduates. She worked during ten years, mainly in the corporate real-estate area. She ended up feeling not adapted to her job, and decided, it was far from being an easy choice, to change her life and start searching for a meaning. She first chose to study an area in line with her values; she pursued a master in sustainable project management. She was disappointed to discover that the only jobs she was offered with this new diploma weren’t adapted to her wishes: “There were only jobs to do green washing”. She thus turned to the associations sector. She managed to obtain subventions for an internship with an association. She organized a national campaign. Unfortunately, it represented yet a new disappointment, even though she had worked really hard, the association ended their collaboration. Strong and determined, she dedicated herself to the CSA movement and became the president of the Ferme du Bec Hellouin (a French small farm in permaculture) CSA group. She participated to the foundation of an association with them to create a training center for future farmers. The association didn’t last because off divergences of opinion between the founders. Another failure! But it was a blessing in disguise! Linda had been taking a class at the Ferme du Bec Hellouin and there she met Edouard. 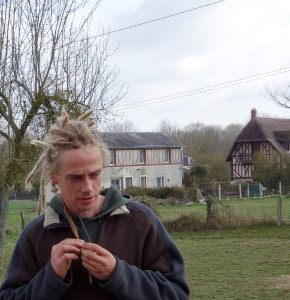 Edouard, while working part time, took this class in order to create his farm. Born in Haute Normandy in France, he was already in strong relationship with nature and agriculture. After working ten years as local government officer in the environmental education sector and with a diploma in tree nursery management, things fell into place when he attended a festival at a market gardener friend’s house. “During the lunch, everyone was complimenting the food produced by my friends. I felt that producing food for people was amazing!” He enjoyed helping his friends, he was determined to become a market gardener!

Meeting Linda was decisive, she decided to help him build a farm; with a complementary profile she represented a key driver. Indeed, she perfectly completed the technical agricultural skills of Edouard as she was competent in planning, management, commercialization and distribution.

A poisoned chalice but a test transformed

The SAFER (a French organism that manages agricultural land selling) sold them a 2 ha land but provided that they followed the installation path dedicated to young farmers (a European measure managed by the CAP).” We wouldn’t do it again; we had to spend all the money of the young farmers’ subvention to pay compulsory services during the first five years: go through a certified public accountant, build a business plan with the support of the chamber of agriculture, subscribe to the Agribox that helps you organize the management of your farm even though Linda was already an expert in that…” 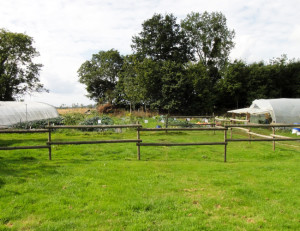 These important costs came along with the disinterest of the local authorities and the autochthons, except the people that belonged to the CSA group and those interested by organic agriculture that had been eagerly wishing for this kind of project to settle in their region. It is indeed the French region with the smallest area of land organically cultivated!

The strict regulations is one of the main obstacle to the development of their farm model. Considering the degraded regional socio-economical context, the creation of a big CSA group is difficult and they practically don’t have access to any public subsidy in order to develop perennial pedagogical activities. Nevertheless, they managed to establish links with a neighbor high school and conducted workshops there for a year. They also provided take home food baskets for the pupils and organized harvesting sessions. They sometimes receive classes for a farm visit and manage each year three interns from market gardening or agronomical engineering schools. They get along with the next door pony club that delivers them manure. 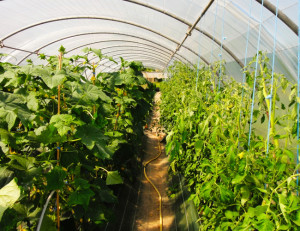 Despite the obstacles, with the help of their families and friends at the beginning, their partnership ended up being a winning bet, the Ferme de la Mare des Rufaux has been profitable since its first year of existence. They have sold to a CSA group since their beginnings and they conduct many experiments on their land (such as growing new and old varieties, associating cultures…) without losing sight of the fact that they have to look for outlets; “Before producing you must know to whom you will sell.”

Some wise piece of advice for future new peasants

“You must remain humble and ready to listen; I do not always agree with what I’m told but I listen really carefully.”

“When you start your farm; do not get into debt in order to do things at your pace, you must make sure of being autonomous with really little resources from the beginning to then have the possibility to take the time you need to develop your activity.”