The globetrotter who managed to live where he wished; in “Toucanne” in Brittany (France) and to do what he loved; work in harmony with nature. 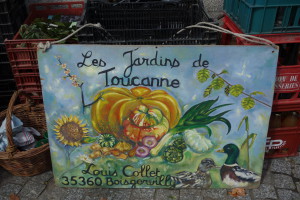 Louis launched an organic gardening
project for a decade with much uncertainty, 15 years have passed and he is still there. He loves his farm, makes plans and has time to continue to satisfy his love of travel.

The discovery of a new agricultural model

Although he comes from a farmers’ family (his parents had a dairy farm) Louis can be considered a new peasant for his approach to organic farming that he discovered late in life. Indeed, during his agricultural studies in the 90s organic farming is never addressed. 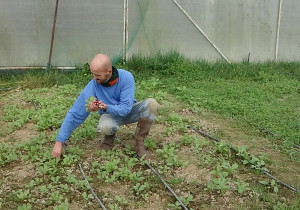 Open minded, he specialized in beekeeping, rural tourism and foreign languages (English and German). The lack of job offers in France and travel cravings push him to leave for two years of volunteering in Cameroon two years of study, training and small jobs in the United States, several months in Germany and catering in Great Britain. 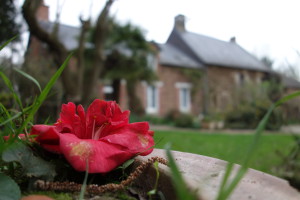 Back in France, two factors encourage his installation. First, the conclusions of a career guidance session advising him to return to the land to reconcile his love of freedom and love of nature. Follows a small four months training (Certificate of Specialization in organic farming). The second, the help of his parents who rent him an old farmhouse with 2 hectares, he particularly likes in his favorite region, Brittany. His parents, approving his approach and the results of the business, decided to sell him this property a few years later. 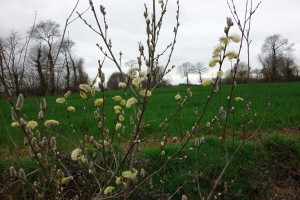 Louis develops a forecast study of installation and elaborates a viable financial arrangement. Installation is progressive with little investments (second hand equipment) and very little yield in the beginning. He does not rely on subsidies that would have required him profitability and loan repayments from the first years. For 7 years, Louis maintains his revenue and “social security” with few hours a week of ecological gardening in private gardens. His parents give him 5 more hectares. These new plots are converted back into meadows after many years of cereal crops with pesticides. Hedgerows are planted all around and very quickly a variety of fauna and flora develops. 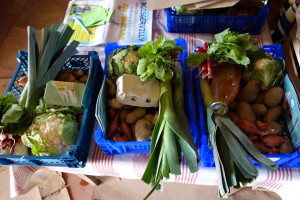 Also with 400 m2 of greenhouses, Louis grows a variety of vegetables. He does direct selling on Rennes markets (Les Lices and Le Mail), to restaurants and via baskets to neighbors. His basic products are: potatoes, leeks, onions, shallots, apples, grapes, plums,… he completes with other local horticultural products according to the season to have a full array on the markets. Our peasant-gardener has gradually specialized and cultivates a dozen varieties of squash that have aroused the interest of journalists, restaurant owners, etc. He sells a few varieties in the shops BioCoop. He also grows fifteen heirloom tomatoes and offers wild plants: nettles, rocket, amaranth, blackberries, and some aromatic herbs highly appreciated by consumers. 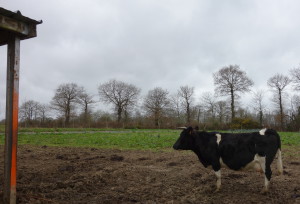 In the meadows wander four Bretonne Pie Noire cows with their offspring and two horses who give little revenue (sales of heifers, home consumption …) and some costs (contractor for hay, fence …) but whose manure is used in the gardens. The winter paddock (small space where cattle are enclosed around their hut with hay, to avoid the destruction of the meadows in the wet season) enters in crop rotation, as Louis learned with the Fulani herders of Cameroon. The well-nourished soil develops a remarkable fertility for the culture of leeks, squash and potatoes that follow. Some free backyard hens makes this farm a living and very lively space. 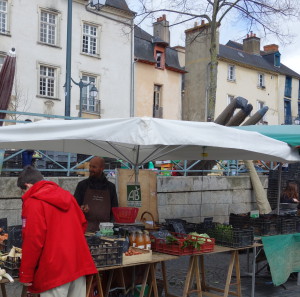 It takes seven years to Louis to get a decent income. Gradually it stops small side jobs to devote himself entirely to the farm. He manages to have a fixed place in the market, becomes known by consumers and restaurant owners who appreciate his products and always want more. His decisions, cautious at first (not knowing if the activity would please him), are first choices of the heart. The good profitability of his production thanks to the choice of minimum expenses and insistence on quality: from farm animal manure, restoring a favorable ecosystem … now enables him to generate little more than minimum wage and to have a month and half per year in winter to travel.

Besides regret not having had in his agricultural training the teaching of organic farming, Louis would have liked a bit more experience in vegetables farming in the beginning. The lack of information in the institutions and in agricultural schools did not facilitate the life of the organic farmer. Added to this is the isolation risk. In his particular case, the financial problem does not arise since he chose not to engage in lending.

From a mastered small-scale development to new perspectives 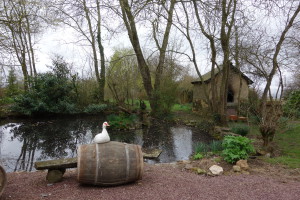 After 15 years, Louis has no plans to increase his production (even though demand is growing), nor to have employees (which would require a new rigorous organization). He plans a renovation of the farm buildings with quality materials to realize a host structure: social, educational, artistic and even agricultural. The network Accueil Paysan encourages him to these new projects: hosting children who do not have access to nature, artist residencies, and advice for future new-peasants…

Here is some of his advice!

“See their activity as a commitment to society rather than as a simple production tool.”

“Give themselves prospecting time for information research and thinking by not listening only to official versions.”

“Look for good land that is not too far from the distribution sites.”

“It is not always easy to find land for rent yet it would be important for the future of agriculture to regain traditional farms that have ceased production before industrial agriculture does.”

“Be persistent and not be discouraged. Do not forget that nature is not an exact science and that you learn by doing. Use your energy to work the field and not to fight with the neighbors and with the bureaucracy, given the few consideration that organic farming still arouses among professionals.”