“Jojo”, the only French producer of tea 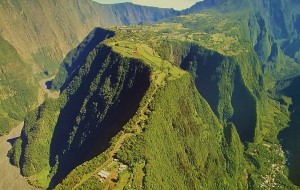 It is in “Grand Coude”, a beautiful village from La Reunion Island located close to a volcanic circus that lives Johny Guichard called “Jojo”, the only French producer of organic tea.

It is difficult to imagine that tea can grow in the Reunion Island. However, in the 60s, 350 ha of tea were cultivated on this island. Today, only 3 ha are cultivated by Jojo.

His road to tea 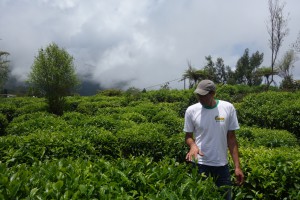 Jojo has not always been a tea producer. He had always wanted to be a farmer but as he wasn’t born into a farming family, his parents were working in geranium farms, he didn’t benefit from land on which he can cultivate. First, he worked in the maintenance of green areas and for the CIVAM Reunion (Initiatives Centre for Promoting Agriculture and Rural areas) for a few years before going to metropolitan France to follow his luck unsuccessfully. In 2002, his parents miraculously found out that a land was available to rent near their house. “It’s so difficult to have access to agricultural land in the Reunion Island that I have not missed the opportunity, even if I would have preferred to buy my property.” He then bought his return ticket to La Reunion and dedicated his self a 100% to the agricultural adventure.

Without thinking, he first chose the culture of geranium, a well-controlled crop on his land that offers the advantage of having a cooperative ready to buy him all his production at a price fixed in advance. But after 3 years, his farm is near bankruptcy (geranium does not pay enough, repeated cyclones …). “To survive, we had to innovate and diversify.” 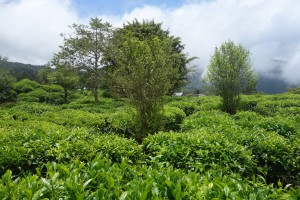 He then realized that on his land tea trees were growing naturally, vestige of the period going from 1955 to 1972 when “Grand Coude” was known for its production. Seeing that tea was growing alone and resisted many hurricanes, he decided to revive this forgotten crop. In 2005, he decided to grow organic tea and to sell it directly on farmers markets. People do not believed him at first when he explained that he was growing this tea by himself and he offered them to visit the plantation on Sundays. Victim of his own success every Sunday, he decided to create the “tea labyrinth”: a discovery circuit that recalls the agricultural history of “Grand Coude” and presents the culture of tea through the visit of the fields and a 1 ha tea tree labyrinth. Passionate about his village and agroecology, the circuit also allows visitors to discover the principles of organic farming and other type of cultures traditionally grown in the village. You can discover a vegetable garden and smell the perfume of geranium whose oil is used mainly by the pharmaceutical and cosmetics industry as a repellent or perfume fixative. Jojo cultivates 4 particularly odorous varieties which agreeably scent his farm with odors of mint, pepper, lemon grass or rose water. Jojo also sells to the public, water geranium, geranium jelly and perfume his teas with those. 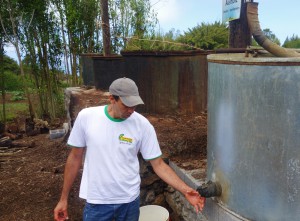 Today, 10 years after the opening, the tea labyrinth is a success. They are 4 employees working on the farm and producing tea, geranium, seasonal vegetables and wood for heating the alembic for extracting geranium oil by distillation. Thanks to the confidence of the farmers in the area that he has won, Johnny has managed to buy land to be certain to be able to perpetuate his project in time. “We struggled at first, but it was worth it. Today I love my job and I learn every day new things. “

One of the strengths of his business model is to have succeeded in diversifying his agricultural activity by coupling it with agritourism. This ensures the brand is recognized through which he developed a strong marketing network. He managed to sell his tea all over the island and especially in the organic shops and most touristic facilities. His tea is found even in continental France and is now forced to invest to build a new infrastructure for drying to be able to meet the demand. These will be the occasion to build a “Tea House” for tourism with a bigger reception area.

The tea plant is not a shrub but a tree which can reach 12m height! 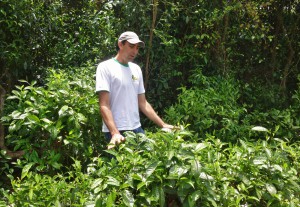 Contrary to what one might think seeing a tea plantation photography, tea plant is a tree which can reach 12m height. These trees are kept up shrubs in tea plantations to facilitate the harvest as only the young shoots are harvested. It takes 4-5 years to get a first tea harvest after planting the seed if you can provide the tea plant with the right level of heat, humidity, soil acidity and cool nights it needs to grow well. “The Reunion volcanic soils are perfect for tea.” 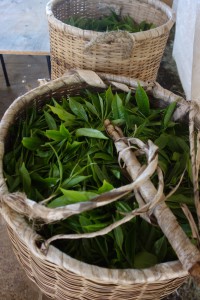 At Jojo’s farm, the harvest is done exclusively by hand to pick the three youngest shoots, two young leaves and the apical bud containing the more substances for more taste. Once harvested, it’s the leaf treatment process that will determine the nature of tea: white, green or black tea… Jojo is specialized in white and green teas. For white tea, with a subtle taste, he dries it in special conditions. To obtain a green tea, tastier, it completes the process by a roasting operation. Black tea must undergo a fermentation process.

The delicate drying process lasts two weeks in total darkness in a controlled environment to bring out the maximum of the delicate flavors of tea. At the end of it, only 130g of dried tea are recovered for 1kg of leaves harvested. “Direct sun drying is significantly faster but most flavors would be lost.”

Johny is currently testing a new kind of exceptional tea, the imperial tea. It’s composed only by the first shoot from apical bud called silver needle. It is called so because when it dries; it naturally takes on a silvery color (due to the white hair of the surface) and reveals a more subtle taste. While a person can usually harvest by hand around 15kg of young tea shoots (silver needle + the two young shoots) in one morning, only 450g of silver needle can be harvested in the same period of time.

Jojo, an innovator at heart…

Jojo is an enthusiast who loves to innovate and discover new ways to grow ecologically. He of course has innovated by choosing to become the only French producer of tea but it’s not just in this area that he is full of inventiveness. One of his land had tea trees from 8 to 12m high. He has opted to keep this forest in order to make discover these majestic trees to visitors and to develop agroforestry activities by planting young plants of tea in it in order to be able to make the gathering in the shade when the weather is too hot. 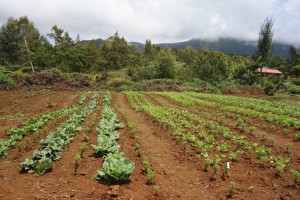 Between rows of geraniums, he plants vegetables to take advantage of the repellent effect of geranium and enjoy the contributions given to the ground by some vegetables. He always puts flowers on the edge of his fields to increase biodiversity, reduce pest pressure and have a beautiful field. He plants tobacco in the middle of his plantations to trap insects. Indeed, pests will attack first tobacco plants and this will serve as a bio indicator to act in time. He practices of course crop rotation and never grows the same crop on the same parcel for two consecutive years. He regularly plants pumpkins to be used as ground cover and to control weeds. He also successfully tested mulching and compost from tea leaves and should extend this experiment to his entire plantation.

All these agroecological practices have worked well since he noticed an improvement in his soil health year after year. “Here in La Reunion, people, including farmers, have a false image of organic farming. They think that nothing can be put on crops when in fact you can use all the natural substances you want. They should have called organic farming, “natural farming” to convert more producers.” Thanks to his example, people begin to understand what organic farming is and some of his neighbors are beginning to replace chemicals with organic products such as organic manure or some essential oils.

“To succeed in agriculture, you must be especially motivated, take advice from local people, go at your own pace and do not necessarily want to be too big from the beginning.”

“Think well about your project before beginning because after you will be too overwhelmed.”

“Join networks. It allows you to have more visibility and share advice and experiences with peers.” 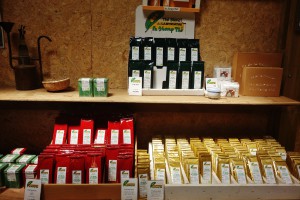 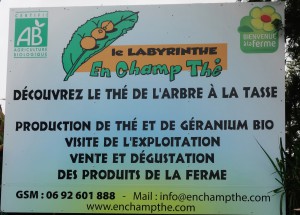