Leave work to create an occupation, a more autonomous activity consistent with their values 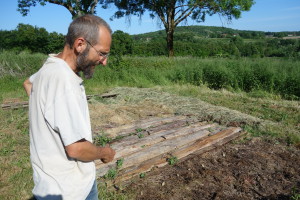 Georges, 48, moved with his brother Sebastian, 38, in 2011 in Burgundy in an old farm set high on a hill surrounded by 4 ha of land. They project to reach almost complete autonomy, following the Permaculture principles and selling their food surpluses and nursery plants directly on the farm. They practice on their land family subsistence farming using agroforestry techniques and define themselves as part-time peasants.

How did he get there?

After working for over 12 years in the world of car centers in the Paris area, his bosses eliminate his job and offer him a new one that does not suit him. That’s when he asks to change professions to work in a field closer to its values. As he says: “I did not want to have a job but a profession.”

Attracted by woodworking, he then takes advantage of a redundancy plan to get financed a carpenter training. He will work as a carpenter for 6 years. This job suits him better already because he works a noble and natural material but it aspires to more autonomy and more ties with nature.

It was during a lecture as part of an eco-festival in 2003 near Nantes (France) in the autonomous house of the family Baronet that he realized it is essential to live consistent with his ideas in order to eliminate much of his life worries sources and make a big step towards wellbeing and happiness. He then made a list of what he needed to reach this coherence between his life and his values. As an avid environmentalist, this consistency passed through the adoption of a simpler life and less consuming via using appropriate technologies (solar oven, haybox, dry toilet, mass stove …) and attain self-sufficiency (including food and heating energy).

Towards a new beginning! 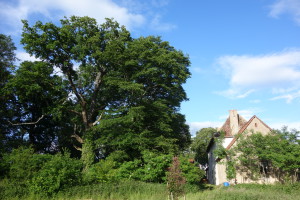 He decided to leave the Paris region to purchase a property on which he can lead a more sober life and practice farming. He then constructs a collective installation project with his family members. Due to differences of views, the project will launch in a small group. It is alongside his brother Sebastian, formerly computer technician, driven by the same values that Georges starts this new adventure. It was not until after 4 years of research in winter (to be sure that land chosen pleases them all year) they find the ideal terrain in Burgundy. Thanks to savings from their prior lives they can buy it without having to go into debt.

Waiting to find the field, George kept pretty busy. He began to learn various agroecological practices, did internships in Permaculture, learned grafting techniques, contacted the Association of les Croqueurs Pommes to learn more about the arboriculture and be sure to plant the right species and varieties … So that since his arrival on the field, he has already planted more than a hundred fruit trees! Following the logic of agroforestry, he spaced them in order to grow annual plants in between rows waiting for the trees to grow and start producing.

Part-time peasant, for the moment… 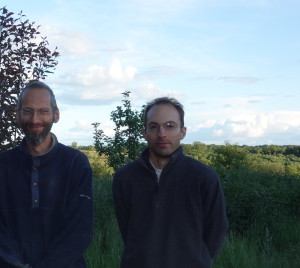 After 4 years of installation and a lot of their habitat renovation work Georges and Sebastian are just starting to find a balance in their part-time farmer activity. The next step is to develop a business selling their food surpluses and nursery. One challenge will be how to include their production model in our society.

Indeed, wanting to live with very little means (300 € / month / person), they cannot currently sell their food surpluses, as did the old peasants, without paying dues to the MSA (Mutuelle Sociale Agricole, the compulsory agricultural social security). But the amount of these contributions is almost as high as they want to earn from their sales. Should we create a new agricultural status to facilitate this type of activity? While waiting to find an alternative, they support themselves by conducting small eco renovation projects of buildings locally.

Towards a new model 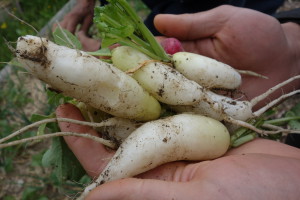 According to Georges and Sebastian, the greatest wealth that we can have is time. It is precisely this time they were able to find in their new life of peasants. They believe that the use of agroecological techniques inspired of permaculture could allow them to have a production requiring little work unlike industrial agriculture they find alienating. They believe everyone should be able to produce at least part of his food instead of working to be able to buy it.

“Our new way of life is like a school, we learn nearly all the time!”

Some advice for future new peasants?

“Preparing your project by meeting as many people as possible on the field for at least one year. This in order to acquire knowledge that can be helpful (cuttings, cultivation of annual and perennial plants, green building …) and experiment. ”

“If you are from the city start with binding to alternative movements in your city such as Transition Town, LETS (Local Exchange Trading System), CSA (Community Supported Agriculture), shared gardens … to acquire knowledge and know-how already in your city prior to settle.”

“Create links in areas of interest to us with people who have the same ideologies.”

“Make sure you do not put yourself time or economic pressure on the early years because otherwise you risk being permanently in the compromise and live badly or even fail. For this, the ideal is to start with a good financial reserve to live soberly during the first 2 years or to keep a part-time job while waiting to set up your system and make a living.”